This Week in The Oodlearium

On Monday night, Tom and I got our first doses of the Moderna vaccine and we were both euphoric…feeling like the end of this Covid nightmare was finally drawing to a close. Then on Tuesday I found out that my mother was in the ICU in critical condition— likely with Covid. My world was turned upside down for a thousand different reasons and I was reeling with a thousand different emotions. I came home early on Tuesday and after a nine-hour Lucifer marathon with Tom, I finally got some rest. There was no way I was going to be able concentrate at school while sitting around waiting to hear any updates, so I opted to stay home and spend the day doing art therapy.

I headed to Michael’s and picked up a whole mess of supplies— retail therapy is not usually my thing, but I wanted to have a variety of projects to work on. The gal who rang me up asked what I was working on and I had to laugh because I had really no idea what I was going to do with all the stuff I had just bought. I had a styrofoam head and a bag of balloons that I thought work to recreate a photo I had seen (it didn’t). I had a ridiculously expensive clump of grass and a giant pink flower, a stack of 10 8×10 canvases, a set of mini canvases, supplies for the cricut, a metal sunflower, and another plastic mask.

I am obsessed with 3-D pour painting right now. After the success of my mask, I have been trying to figure out what else I could pour over. When I saw the sunflower, I knew I had to try it. I had no idea if it would work out or just be a mucky mess. While it did not turn out how I thought it might, I really do like how it turned out and I am thinking of going back to get a few more to make a set.

Early on when I started pour painting, I decided to make use of two old cookie sheets to catch all my spillage. It definitely bugged me that there is so much waste in this art. I follow Callen Schaub on instagram and I love how he uses all of his process pieces as art, too. From the trough he uses to swirl his paint to a canvas on the ground that catches all the spillage. So each time I do a pour, I just let the paint sit in the tray. Well, this week, I finally picked up some plastic triangles to use to prop up my canvases. After my pour dried, I realized the triangles had also dried into the paint. When I was yanking them out, it actually pulled up a solid sheet of paint…leaving me with two really cool pieces “fabric.” We did a bunch of brainstorming on what I could with them and finally decided I am going to try and make coasters with them. Tom gave me the idea of creating concrete coasters that have an inset for the pour. Then I will cover them with epoxy. I don’t know anything about any aspect of that project, which is exciting, but also means that it will have to wait until later for me to play around with…mainly when the weather is more reliable for me to work outside with concrete. For now, here are the sheets…pretty cool, eh?

Earlier this year we had an opportunity to do some self-care during a professional development at school. A fellow creative offered to show me how to cut glass that I would eventually be able to use to make a gazing ball out of a bowling ball. She also showed me how I could cover a bowling ball in washers. When I randomly asked on Facebook if anyone had any bowling balls they were trying to get rid of, I didn’t expect someone to say they had four that I could have for free! I gave two to my friend and kept two for myself. Yesterday was the first day since I got the balls where it was nice enough to sit outside and start work on the project. I LOVE how this is turning out. The process is incredibly therapeutic. It helps me with my “letting go” work because it is impossible to create a perfect pattern. And, it is looking really cool! While I was outside, I had an idea of what I wanted to do for the base. We have a bunch of chunks of our neighbor’s tree that was struck by lightning. I want to prep and finish one to be the base for the ball. Not sure where I’ll put it yet.

Tom and I decided to spend this entire weekend on maker projects. It was just what I needed, but I wanted to challenge myself to not just fall back on my regular projects of canvas pour painting and making cards. A while back I was doing a virtual painting session with a fellow creative in Israel. We were talking about how she is always frustrated with how her pours turn out and that really likes how mine turn out. I told her what products I use and that everything is set up, I just have to decide on my color combos and pour. Ready to pour paint is not available in her area (huge bummer!). I told her that I would play around with mixing my own and let her know what I figured out. I finally had the chance to play around and it IS really challenging. I mixed acrylic base paint with Elmer’s glue and then added pour medium. When I do a regular pour with my pour ready paint, I know exactly how much paint I need. With this method, I had no idea what I was doing. I decided at the last minute to pour through my regular colander. I started pouring and the paint just sat there. I kept pouring hoping the weight would push it through. I finally lifted the colander and realized this was going to take a bit of effort. As I was tilting and sliding the paint, I could tell there was not going to be enough to cover the canvas. I grabbed the colander to see if I could get any more to slide out and was thrilled that it did. As the paint was drying, I noticed a few air bubbles, so I decided to try my heat gun out on it. That caused this crazy crackling pattern which I have never seen before. The moral of the story is that it was LOT more work to create this pour, but it was definitely something I will play around with. I thought it would be cheaper to use straight acrylic and mix my own, but after the amount of glue and pour medium I used, I honestly don’t know that that is true.

I saw this photo a while ago on Pinterest. When I saw this week’s challenge was color relationship, I thought it would be perfect. Small problem— I didn’t know anyone who would let me paint them white…who does that? My sister-in-law suggested trying to use a styrofoam head…which made me wonder if I could stretch a balloon over it and get the painted effect. I knew it was a long shot, but I had to try. Yeah— it didn’t work. I tried a whole mess of other ideas with the head and the white mask I bought, but nothing was working. On Saturday, I decided to play around with another piece of glass I have— a pretty light purple dish of sorts and then a green background. I messed up while processing one of the images and this crazy blue resulted. I had my image! 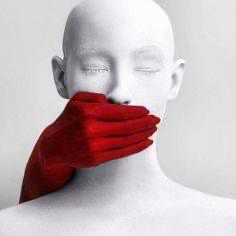 Creativity, This Week in the Oodlearium